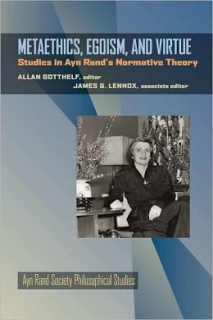 Philosopher-novelist Ayn Rand (1905–1982) is a cultural phenomenon. Her books have sold more than 25 million copies, and countless individuals speak of her writings as having significantly influenced their lives. In spite of the popular interest in her ideas, or perhaps because of it, Rand’s work has until recently received little serious attention from academics. Though best known among philosophers for her strong support of egoism in ethics and capitalism in politics, there is an increasingly widespread awareness of both the range and the systematic character of Rand’s philosophic thought. This new series, developed in conjunction with the Ayn Rand Society, an affiliated group of the American Philosophical Association, Eastern Division, seeks a fuller scholarly understanding of this highly original and influential thinker.

The first volume starts not with the metaphysical and epistemological fundamentals of Rand’s thought, but with central aspects of her ethical theory. Though her endorsement of ethical egoism is well-known—one of her most familiar essay collections is The Virtue of Selfishness—the character of her egoism is not. The chapters in this volume address the basis of her egoism in a virtue-centered normative ethics; her account of how moral norms in general are themselves based on a fundamental choice by an agent to value his own life; and how her own approach to the foundations of ethics is to be compared and contrasted with familiar approaches in the analytic ethical tradition. Philosophers interested in the objectivity of value, in the way ethical theory is (and is not) virtue-based, and in acquiring a serious understanding of an egoistic moral theory worthy of attention will find much to consider in this volume, which includes critical responses to several of its main essays.

From the book’s back cover:

“This is a superb collection of essays on Ayn Rand’s metaethics and her theories of value, virtue, and egoism. The dialogues between leading Rand specialists and distinguished moral philosophers less familiar with her philosophical work shed new light on the relationship of her thought to contemporary analytic philosophy.”
—Fred D. Miller, Jr., Bowling Green State University

“Ayn Rand’s Objectivist philosophy is an important cultural force in the United States today and influential in contemporary political debates. And yet there has been a dearth of sustained philosophical discussions of Objectivism in the scholarly literature. Fortunately, this is changing. In Metaethics, Egoism, and Virtue, a very strong group of philosophers debate such central questions as how Objectivism approaches the foundations of ethics and analyzes the nature of value and virtue—including the complex relationship between rational egoism and altruism. Philosophers interested in engaging with Objectivism with greater clarity and depth would do well to start here.”
—Peter Railton, University of Michigan

“A valuable and exciting project. Gotthelf and Lennox are universally recognized as being two of the leading Ayn Rand scholars.“
—Harry Binswanger, professor of philosophy,
Ayn Rand Institute
“At long last a book has brought together specialists in ethical theory and moral psychology with scholars of Ayn Rand, to engage with Rand’s thought at the highest levels. These energetic discussions will be of interest to ethicists as well as social and political thinkers.”
—John David Lewis, Philosophy, Politics, and
Economics Program, Duke University